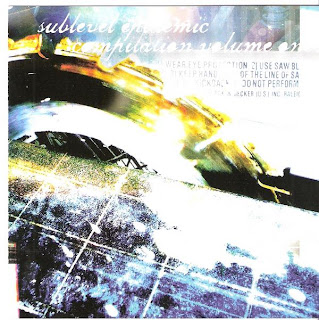 Sublevel Epidemic is an independent hip hop lable from Burlingame California run by former Below The Surface and Sofarwest owner playboy Kegs One. As a lable Sublevel Epidemic released music in every format, but they were most well known for their colorful limited edition 7" releases. The Sublevel Epidemic Compilation is a collection of the 7"'s mixed by Cosiner, featuring tracks from Emanon, Murs, Hip Hop Kclan, Logic, Deeskee, Maleko, Space Ranger, Xololanxinxo, Spex, Omid, The Chain Smokers, Disflex6, Anti Mc, Radioinactive, Mumbles and an exclusive unreleased track from The Dereliks courtasy of Dj Hen Boogie.

This compilation reminds me of one of my favorite record collecting stories, which came during my second trip to San Francisco in 2002. I had been buying the Sublevel 7's when they came out but I missed a few of the early, sought after releases. I tried tracking them down from various sources, I was able to get a test press of the Maleko, Space Ranger and Deeskee - Abnormal Psychology 7" from Deeskee (Thanks again)  ﻿but I was still missing a few records. I went to Amoeba Music one night with Kegs and while going through the used 7" boxes, I came up on multiple copies of all the records I was missing. Of course I bought every copy and made sure the extra copies found their way to other people in my position, looking for the records they missed. That trip stands out to me because it's one of the only times I've gone into a record store and found everything I was looking for.