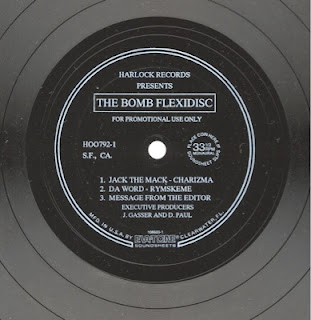 I ripped this a long time ago and I'm not sure why its taken me so long to put it up. The Bomb Hip-Hop flexi disc vol.1 was a promo that was inserted into the classic Bomb Hip-Hop magazine back in 1992. This one sided flexi disc features 2 tracks and a message from Bomb Hip-Hop founder Dave Paul. I can't claim to be O.G enough to have acquired my copy from a Bomb Hip-Hop magazine back in the nine deuce, but I am O.G enough to have bought a copy from Dave Paul off Ebay back in 2001. Being the huge Charizma (R.I.P) fan that I am I was excited to hear his track, and in 2001 there wasn't a lot of his music available. I don't know a lot about the other artist, Rymskeme but I was very impressed with his track and would appreciate any info anyone has about him and his music.