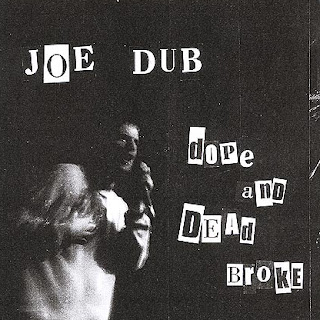 Dope And Dead Broke, the super fresh limited edition 8" record released by Anti-Party Music in 2005. Yes you read the last sentence properly, I definitely said 8" record. The super fresh record label Anti-Party Music decided that 7" records were played out and they took it to the next level and dropped an 8". Printed on clear wax, Dope And Dead Broke was limited to 120 hand labelled copies worldwide and I was lucky enough to get my hands on one. All the tracks are taken from the Young Joseph - Noise Pollution album that was released in 1999. I'm not going to say much more about this record, I'll let Joe Dubs liner notes tell the story:

These songs were recorded between 1998 and 1999 on an old Tascam porta03 4-track, in Los Angeles, Phoenix, and San Francisco. The songs you hear on this record capture a part of my life when I was making the transition from group member to soloist...with Noise Pollution I finally had complete 100% control over the content...production...etc...it was the FIRST project that I handled myself. "Raps in It's place" is my favourite song from this era...Alex75 blessed me with the beat...it was an attack on the ego's and the "god" status that fans put on mc's...and that mc's put on themselves...kind of like where when and why the music became second fiddle to the face that says them...we shot a video for this one that only a few eyes have seen...this song still holds close to my heart...I've been asked to redo a cleaner version but that would dirty the whole point of the song...Alot has changed since Noise Pollution was recorded. I've grown not only in age but as a person...my views not only towards music but towards life as well...I take the same approach to music now that I did back then...only now i apply what I've learned along the way to improve on the areas I feel lacked in the past. Many people requested that the full length of Noise Pollution be released on vinyl, but due to quality issues I felt that doing this limited edition 8 inch with some hand picked songs made the most sense. Thanks to everyone who's ever supported me...my family and my music...oh yeah and Plankton and the anti party people all over the world.    - Joe Dub