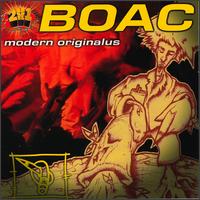 Modern Originalus, the debut album from Boac released in 1998. I remember the first time I heard Boac, it was from the 19 Ninety Now Theme Transmission 12" a friend owned. Neither of us knew anything about Boac or any of his other music, or if he even had any. One day, probably in early 2000, a family member gave me a gift certificate for a local music store. Now living in a medium sized city in Canada, the local music stores selection was/is pretty terrible. The store had this frustrating computer in the back that would allow you to search all the albums the store could order. My friends and I had spent hours sifting through that system looking for things to order, the only 2 albums we ever found were Freestyle Fellowship - Innercity Griots and Hieroglyphics - Third Eye Vision. One day I went down to the store and started the gruelling process of finding something to spend this gift certificate on. After a while I was starting to get tired of the searching process and I was prepared to sell the gift certificate for whatever I could get for it. I decided to start searching for some more obscure artists, hoping for a miracle. I was shocked when I searched for Boac and the system said there was an album available from him. I had the store order the album and 3 weeks later I picked it up. Since that day I've followed his music closely and picked up as much of it as I could.

Enough of that rambling, all you need to know is that this album is good, it has guest spots from Odis, Mystic Moe & Will Power (Midnight Voices), Safari, Iwa, Mr. Pibb, Top Ramen and production from Boac and Bootleg.