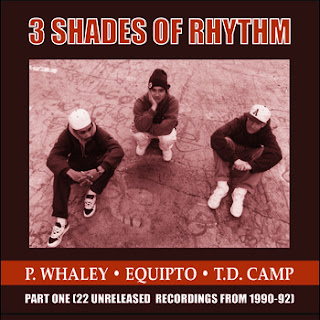 3 Shades Of Rhythm is P.Waley, Equipto and T.D Camp. The tracks on this album were recorded between 1990 - 1992 at the Jam studio and studio 280. This is some classic bay area underground, an absolute must have for any collection.

Growing up the homie Quinn had a 100th generation dub of a 5 song tape labeled "Hiero Demo". The quality of this tape was so bad that you could barely make out any of the lyrics and the beats sounded really muffled. The sound quality was enough to keep me from dubbing it for myself, but not enough to stop us from listening to it. We listened to this tape almost as much as our Naughty By Nature - Hip Hop Hooray Cassingle, while we mobbed around town in a 1990 Ford Escort. Because of the bad sound quality you could barely make out any of the lyrics, however there were always two lines that were completely audible and stood out to me, "I only dub these for my buddies" and "What's up my *** long time no see yo, what's that you're playing? oh shit that's me." In 2004, sometime around my birthday I received a package in the mail from Hamilton's finest Fatmike, inside was a tape labeled "3 Shades Of Rhythm" and a note telling me not to listen to it too loud because there was some loud screeching noises on the tape at random spots. I listened to the tape and the screeching was pretty bad at times, but the music more than made up for having my ear drums blasted with high pitched squeals. While listening to the tape I realized that one of the songs sounded familiar but I couldn't figure out why, then I heard the chorus "I only dub these for my buddies" and I was floored. The 5 song Hiero Demo tape we thought we had was actually 5 tracks from 3 Shades Of Rhythm. I asked a few people about the crew and Kegs One told me that T.D Camp was getting ready to release the album on CD along with the T-Mor & Schwinn album.

Shouts out to Jack Devo for pointing out that the last link wasn't working properly. Here is a link to download the entire album.