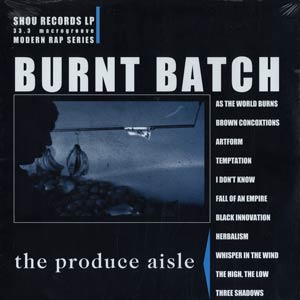 I first heard about Pismo on his Game 12" back in 2001, which I think I copped on the strength of A-Plus and Pep Love being featured on it. Once I heard that record I needed to find more music from him. One problem, at that time he didn't have any other solo music out that I could find. A few years later I saw this album sitting in a record store, I didn't know who they were but I copped it because Plado from Twisted Mind Kids was featured on it. I was happy to find out that Pismo was involved and this record has been a favourite of mine ever since. Since then I've found a few other Pismo solo 12's and his full length from 2006, but I've always felt that he was under rated as an MC.

If anyone has a copy of the Burnt Batch - Universal tape I would love to get my hands on that.