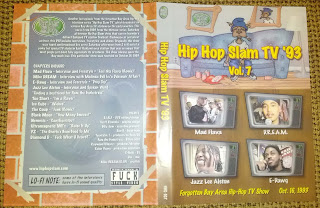 Vol 7 of the short lived bay area Hip Hop Slam TV series broadcast in 1993. This is my favorite volume in the series, partially because the videos they play are great, but mainly it's because of the interview with Mike Dream R.I.P. Mike Dream is a legendary Oakland graffiti artist that many people credit as one of the most influential graffiti artists of all time. Dream was killed in a senseless random robbery in February 2000. For more info on Mike Dream check out Piece By Piece a really well made documentary about the Bay Area scene from the late 80's to the mid 90's.