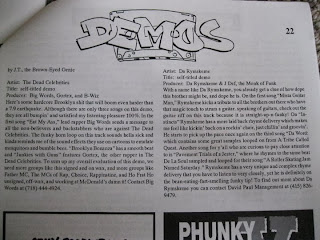 I don't know much about this bay area crew made up of members J Def and Rymeskeme. To my knowledge this is the only full length album they released, however they did have a track on the original Bomb Hip Hop Compilation and Rymeskeme was featured on the first Bomb Hip Hop Flexi Disc. I'm not sure if either member is still making music, but based on this album I really hope they are.