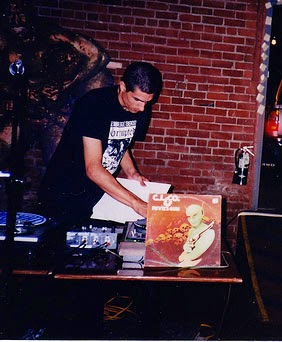 Ken Hamilton aka Dj Spiderman was the host of the Monday Beatdown on 89.7FM KFJC. Not being from the bay area I wasn't familiar with Ken until 2009 when Ripped Open By Metal Explosions posted links to some of his old radio shows and I read through the comments section to see how influential he was in the local music scene. Ken was killed in a car accident in 2000.

Searching online for copies of Ken's Monday Beatdown shown yields very few, however Ken's friend Japanic has posted some of Ken's work on his Soundcloud page. There is also an Amoeba Blog post about Ken written by Billy Jam. If anyone out there has any copies of the Monday Beatdown show please let me know, I would love to get my hands on them to make them available online for everyone to hear.

Last summer I was going through a box of old VHS tapes when I found a tape labelled "Spiderman Tribute Show At The Justice League." At first I didn't clue in to who Spiderman was, but after checking a few old bookmarks I realized that Spiderman was Ken Hamilton. I don't know where I got this tape, I'm sure it came in a trade back in the early 2000's. I ripped the tape a few weeks ago, and although the show is incomplete and the audio isn't the greatest, I wanted to post it because I feel it is important to see all of these artists who came together to pay tribute to Ken.