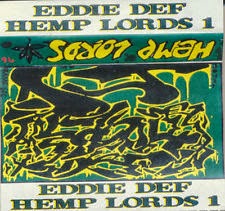 I have a confession to make, when I bought this tape I didn't know who Eddie Def was. I was familiar with Dj Quest and Dj Marz and I knew who the Bullet Proof Scratch Hamsters were but I didn't realise Eddie was part of the crew......feels good to get that off my chest.

I bought this tape from a small hippie used CD store in the small town I grew up in. I went in to sell some junk Cd's, when the owner was being stingy on the trade in value of my old Columbia House Cd's I decided to take him up on the store credit option. When I asked about the tape he didn't know anything about it and didn't have a tape deck around to let me hear it. Despite all of this I decided to take a chance and I was glad I did, this tape became an instant favourite and was in regular rotation for years.

The Hemp Lords tapes have been posted on various sites over the years and I'm pretty sure my digital versions came from Rekordz On Wheelz many many years ago.

One thing to remember when listening to a Bullet Proof Scratch Hamsters tape, other dj's may have been given the credit for something, but there is a good chance the BPSH did it first...and probably better.