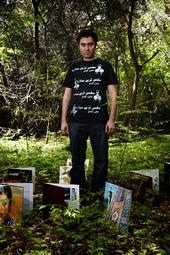 I don't know anything about Anthony Valadez, but I came across the episode of his In Conversation podcast featuring Omid and thought some of the readers would enjoy it. Here is the info from soundcloud:

"Omid is one of my first guest's that I had on back when I had a radio show over at KCSN in 03. 12 years later we bring it in full circle and he's still hard at work with his recent release entitled "Modern Persian Speech Sounds" which I play on my KCRW show. But one of the other reasons I wanted to bring in Omid on the podcast was for him to share his knowledge of Los Angeles's musical landscape dating back to the late 90's.
He too was a kid who loved taping radio programs including Michael Mixxin Moor, Mike Nardone and Rob One of the Fly ID show. We also speaks fondly of his days venturing to The Good Life and Project Blowed. He also speaks of his role as Music Supervisor on the recent Good Life documentary which was directed by Ava DuVernay. And little did I know she was an emcee at The Good Life! Hope you enjoy this week's episode!

** Also as a bonus, Omid crafts a special mix for this episode which includes some unreleased material as well as personal favorites."