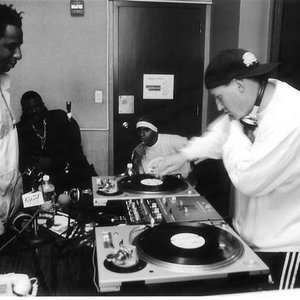 I was cleaning up some folders the other day and I stumbled on this unreleased 12" from Dj Raw B that was originally posted on the Ripped Open By Metal Explosions blog back in 2010. Here's what Luke Sick had to say about the tracks:

"Recorded much earlier this decade, but never released, here's a Maxi-12" packed with raw underground hip hop power that hit the cutting room floor, but can now be released digitally like it was aged whiskey. Raw B of KUSF Beat Sauce (R.I.P.) cred is a minimalist beast on the MPC. He was raised by the old school and brought it to radio every week for the true heads to absorb. That's Bambatta sitting down in black peeping the vet's skills in the top pic. Respect."

There are 3 tracks featuring beats from Raw B and raps from Pep Love, Luke Sick, and Azeem. Peep the original post for links to download the tracks.
Posted by Jibs at 7:49 pm
Labels: Azeem, Dj Raw B, Luke Sick, Pep Love