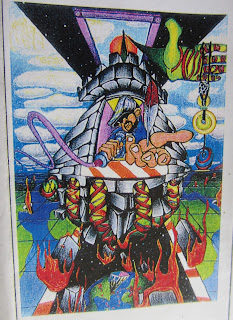 Another request from the Record Science archives. King Koncepts classic Project Ambershine album. I believe this is a different copy than the one from Record Science, this version is split tracks and might have some from a Bay Area Rap Tapes post on CocaineBlunts back in the day.

I will always remember the first time I heard this tape, I had recently traded some dubs with a buddy and he laced me with a bunch of classic bay area underground albums. At the time I didn't know anything about this tape and he didn't give me a heads up about how good it was. Living in a small town with a small scene when someone got their hands on a new album it slowly made the rounds and people tried to catch dubs. Fast forward 2 weeks and I came home from my part time job at a grocery store to a friend in my room going through stacks of my tapes. He was frantically fast forwarding through tapes telling me about a verse from Murs that he heard that night at university. The person who played it for him didn't tell him anything about it, just that he had recently dubbed it from a mutual friend who had recently returned from a trip to the bay. For the next few hours we fast forwarded through albums looking for the illusive Murs verse. When he finally grabbed Project Ambershine I told him I recently got it and that I hadn't listened to it yet. For some reason, maybe it was because it was getting late but we decided not to fast forward through this tape, we just hung out and listened to it and sure enough 4 tracks in on side 2 he hears the verse he was looking for "I believe it was last year about this time, when I broke out through the gate to meet my fate leaving hell A behind." He told me he was going to take the album home and he would get it back to me the next day. The next morning I checked my mailbox and he had already returned the album. This tape spent the next few months on constant rotation, and to this day it still gets listened to multiple times a year. The Gate has always remained my friends favorite track from this album, but for me it's all about Two M.F.'s Troopin 2 The Sun.

Over the years I've managed to come up on multiple copies of this album, in the early 2000's I found a copy in a 99 cent bin in Vancouver. A few years ago while I was delivering a gift to a friend he told me he found something while going through some old boxes and since he didn't have a tape deck anymore he thought I would enjoy it. I made sure those extra copies found their way to people who would appreciate them and to this day if you asked me where I got my original copy from I wouldn't be able to tell you....not sure why I remember how I came up on those other copies but I do.