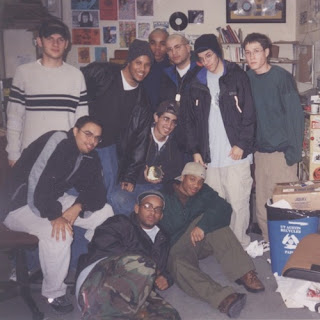 "College radio holds as special place in my heart. A non-commercial student run control room is my *happy place*. Records scribbled all over, racks of carts that haven’t been touched in ages, dust balls floating while local rappers freestyle their asses off late at night to a captive audience usually sitting in cars, parking lots and living rooms drinking 40’s and fingers crossed taping it all. At least that’s my vision of it. This episode of the is an offering of just that from 25 years ago (original recorded on cassette). On September 21st 1995 from the campus of the University of Texas in Austin in broadcast studios of student radio station 91.7FM KVRX on it’s greatest weekly export the House of Phat Beats show with Les aka DJ Lil Tiger and Kari Orr aka Koolaid. You may be wondering how I came to find this show and these guys, well I’m glad you asked. It’s because of rec.music.hiphop an accent early-internet forum of many decades ago - Kari Orr was respected voice amongst a gaggle of angsty teenaged Rap opinion-havers while his partner in radio Les would post their radio show playlists weekly. Back then we all were eager students in the tape trade - largely informed by Stretch & Bobbito and The Wake Up Show among other hip-hop radio in major cities. Sharing joints especially if it was unknown, unreleased or rare. Show after show 'House of Phat Beats' were an exemplary example of this. On this recording we’re blessed with an off the cuff freestyle appearance by Souls of Mischief, in Austin promoting their then sophomore album No Man’s Land. Appearances by Tee Double, Mad One, among others! Listen to this like you would the radio in the mid 90’s even if you weren’t alive in the mid 90’s. The volume jumps a bit up and down, stay close to the volume button aka knob. Most importantly, enjoy this letter from the old school, just for you. Les remembers "We had two turntables in the control room, but they were wired to run remotely through two channels on the large control board where we managed all the other machines (CD players, minidisc players, cart players, cassette decks). We had no DJ at the show. We just played tunes, and worked with what we had". I'll post the tracklist on my IG @culturama"
Posted by Jibs at 7:41 am